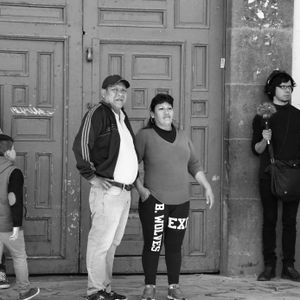 MONOLOGUE by Sama Waly
The recording starts with a bodiless voice speaking in the first person trying to define the Ego. As a matter of fact, the voice enters in a process that leads to emptiness.

+ FROM HERE TO THERE
Carte Blanche to Elena Biserna (It/Fr) with Emeka Ogboh (Ng/De), Brandon LaBelle (Us/De) and Simohammed Fettaka (Ma)
In our liquid, globalized contemporaneity, identities are less and less defined by geographical determinations but rather result from different kinds of trajectories, processes of subjectivisations, permeable and rapidly pervading imaginations.

+ Carte Blanche to Radio Tsonami (Cl) with Élder Olave (Pe)
Uyariy Nisqayta is a series of radio shows created for Radio Tsonami, based on the research of the soundscape of the city of Cusco, Perú.