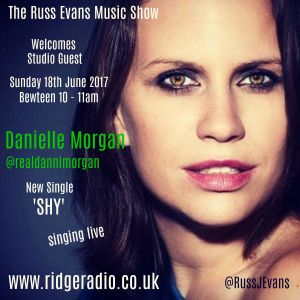 This show was 13th in the global indie pop chart.

Listen back to The Russ Evans Music Show on Ridge Radio UK where Russ is joined in the studios by UK singer songwriter Danielle Morgan. Live tracks include Behind Closed Doors and Take Him Away plus Danielle's New soon to be released single SHY. The second half of the show feature 6 tracks by James Arthur from his Back From The Edge album. Also great tracks in the show from Elinborg, Eivor, LP, Elvis Presley, Dan Fogelberg, Cat Stevens, Paramore, Trinity Rose, Marie Danielle, Clark King, Delphi Freeman, George Michael, John Waite. Next show is on Sunday 25th June 2017

Russ Another James Arthur who I first liked more when you introduced him to me, us with your playing now I love any song he sings he is amazing !

He is certainly good Theresa :-)

Thank you si much