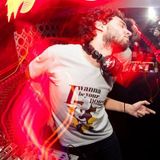 Rodrigo F. is a journalist and rock DJ who had his life saved by rock'n'roll when he was only a kid after been introduced to the first time to the Rolling Stones guitar riffs. From this time rock'n'roll became not just the best music to listen throughout all moments in life but more than that a life style, a cult, a hope.

As a DJ he is influenced by rock'n'roll in it's different languages such as Rockabilly, Classic Rock, Glam, Psychedelic, Punk, Alternative, Riot Girl, Grunge, New Wave, Britpop. His sets are filled with mainstream hits and also underground anthems.

So grab your air guitar and let's feckin' rock! See ya on the dance floor rockers!