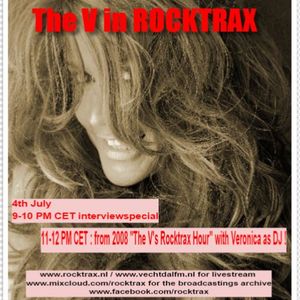 Veronica Freeman interviewspecial and The V.

Interviewspecial with Veronica "The V" Freeman about amongst others her first solo album "Now or Never" that was released at Frontiers Records on 3rd July (Europe). Veronica is known from Benedictum and has been a regular interviewguest in Rocktrax since January 2006. The interview was broadcasted on Saturday 4th July on Rocktrax and later that evening Veronica was also dj in her own "Rocktrax hour", a rebroadcasting from 2008 but a timeless show. The whole Rocktrax broadcasting will be uploaded as well. Enjoy The V in Rocktrax ! More info about Rocktrax on www.facebook.com/rocktrax