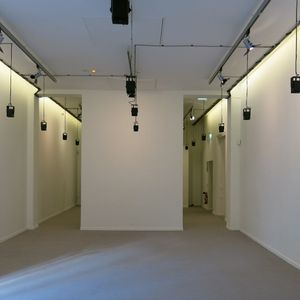 Audio from “The exhibition of a Dream,” curated by Mathieu Copeland at the Fondation Calouste Gulbenkian, Paris, 7 October to 17 December 2017. This musical exhibition is formed of dreams by cineasts, poets, writers and artists. FM Einheit composed songs from their dreams which were recorded in the buildings, amphitheatres and gardens of the Calouste Gulbenkian Foundation in Lisbon, in February and June 2017; and produced and mixed by FM Einheit in Steinschlag Studio, Germany. We hear four representative works, chosen by Mathieu Copeland and FM Einheit. They are 'Alpine Traum' by Lee Ranaldo; 'The Squid' by Émilie Pitoiset; 'Death Progression' by David Link; 'Joyful Pleasure' by Susie Green; “Carpet” by FM Einheit; and 'Creation: Recreated' by Genesis Breyer P-Orridge. In addition to the dreamers, the pieces are performed by Volker Kamp, Robert Poss, Erika Stucky, Susan Stenger, Saskia von Klitzing and the singers from the Gulbenkian Choir.