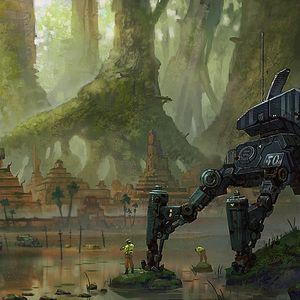 Enter a land of dense jungle & towering alien artitechure. The populace of the South live in huge cities hidden in the jungle. The South has yet to come into contact with the North, East & West however the tribal communitiy has been heavily influenced by visitors from another World. The South incorporates "alien spirit technology" into their everyday life, creating a juxtapostion of ancient religions and futuristic science, ancient temples sit alongside robotic machines. The South is a formidable place, and if travelers were able to breach the twisting jungles and dangerous wild life they would find themselves in contact with tribal warriors, towering mechs & alien weaponary.

thank you, glad you enjoyed it :)

thank you, glad you enjoyed it :)

Been looking forward to the South, the land of over inflated house prices/strange accents and beer that costs( minimum) £5 a pint : )
Nice chilled start, slow tempo...violins, flutes, guitars....you always manage to slip a didgeridoo in as well( no pun intended)
Initiation - Thelemic Pulse...nice track this, great tribal percussive and psy feel to it.
Went crazy at 30.40, wasn't expecting that, must have been 180bpm+....mental!
Calmed down again for the last 14 minutes with a more chilled out feel.
I enjoyed this Rob, it certainly told a story. Probably my favourite of the Compass Bearing series so far.
Lets see what the West brings : )

Sean Berrigan a.k.a. The BP1y ago

Dude always a pleasure to listen to one of your mixes, this is excellent; I’m loving this compass bearings series. The cover art is awesome too!