Queensland Railways, the Eggs, the Prime Minister and Warwick by Greg Hallam 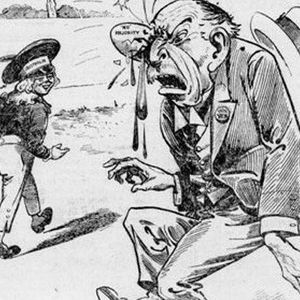 Queensland Railways, the Eggs, the Prime Minister and Warwick by Greg Hallamby RHSQ

In November of 1917 two eggs were flung at the Prime Minister of Australia, William (Billy) Morris Hughes, that knocked his hat off, at Warwick railway station. The incident took place during the heated atmosphere of the second Conscription Referendum in Australia, and lead to the creation of the Commonwealth Police.
Greg Hallam is a professional historian, member of the PHAQ and has been employed by Queensland Rail for nearly 20 years. He is also a member of the RHSQ and recently was involved in the commemorations of the centenary of the egg throwing event at Warwick in 1917, against Prime Minister Billy Hughes, during the second conscription referendum.