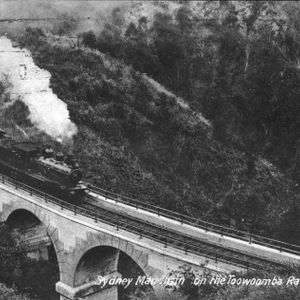 The Sydney Mail train was the premier Queensland Railways’ service of the later nineteenth and into the 1920s. Wallan-garra (to give it its post 1908 QGR spelling) marked the point where two differing track gauges of 4 ft 8½ inches (1435mm) for New South Wales, and 3ft 6 inches (1067mm) for Queensland met. Passengers would change trains here to complete their journey in either direction. The Sydney Mail was the main inter colonial/interstate link until the advent of the “Brisbane Limited”. In later years the train became known as the Wallan-garra mail, indicating the decline of the importance of the train. The last Sydney Mail (26 Up) ran on 29 January 1972, and the Brisbane-Wallan-garra service was withdrawn as of 1 February 1972.

Greg Hallam is member of the Professional Historians Association of Queensland and a member of the RHSQ. Greg has been active in the cultural heritage field in Queensland for nearly 25 years and is employed as a Historian by Queensland Rail.