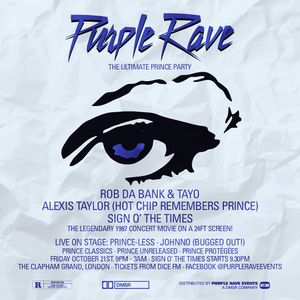 THIS FRIDAY 21st OCTOBER Rob da Bank and Tayo, will team up for a very special Purple Rave celebration event at the Clapham Grand.

Joining Tayo and Robby on the night will be Alexis Taylor – front-man of Hot Chip - who played a set to a huge crowd at this year’s Glastonbury under the tribute Hot Chip Remembers Prince. Expect Prince classics, Prince unreleased and Prince protégées.

Purple Rave will also be screening the 1987 concert movie ‘Sign O’ The Times’ on the Grand’s 24ft wide screen! The film will be played from 9.30pm. Pretend you are in the audience, dancing to one of Prince’s finest hours (well, 90 mins). The 13 song strong film features Revolution members Sheila E and Dr Fink as well as Prince’s protégée Cat.

Ahead of the party we've prepared a brand new mix for your purple pleasure.

Andre' Foreman Aka DJ Rokwave5y ago