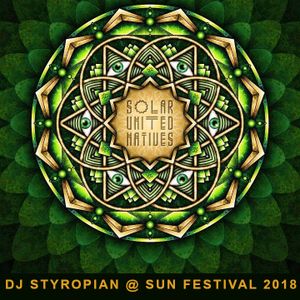 This show was 22nd in the global psytrance chart.

Was born in 1982, lives in Katowice. First time he had contact with psytrance about 1997, when he heard the recordings of Juno Reactor. At the beginning of his adventure with electronic music, he derived recordings and knowledge from the already non-existent broadcasting station Evosonic and broadcast "Technikum Mechanizacji Muzyki" on the radio RMF. With the growing number of events were widening his connections. At DJ Dudi's instigation Styropian bought his first vinyls and on 12 October 2002 made his debut at the event "Psychedelic Experience" in a small club "Tarantula" in Bytom. Less than a year later joined to the team Psytrance.pl. At the turn of 2004/2005 set up collective - Psylesia Crew, which every two months organize the event in a series "..... Tales " in the INQbator Club in Katowice. Since 2005 is a frequent guest at events in different cities in Poland, Czech Republic and Slovakia.

Superb mix - this is right up my alley when it comes to Psy Trance!