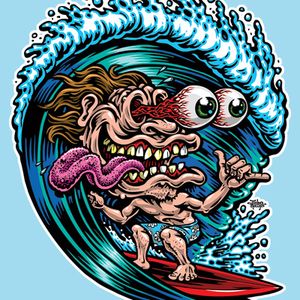 Richie Allen & The Pacific Surfers, The Lively Ones, The Fireballs, The Surfdusters, The Malibooz and more.

Maybe Jimi Hendrix almost killed it when he promised (in 1967!), "You'll never hear surf music again" on "Third Stone from the Sun." But Hendrix is dead, and Dick Dale lives! So, too, do the Revels, the Beach Boys, the Surfaris, Annette Funicello, the Ventures, and dozens of others. At least they do in this upload. By the way, "cowabunga" is "a yell of excitement by a surfer." As to the lasting appeal of surf music, perhaps it has something to do with the fact that it's mostly instrumental. People make jokes about dumb California blonds, but the ones who made most of the classic surf sides knew one thing: it's wise at times to keep your mouth shut and play! --Steven Stolder