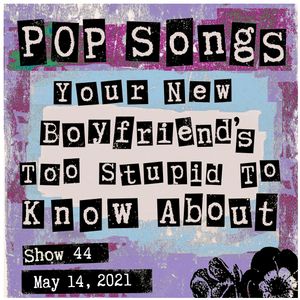 Pop Songs Your New Boyfriend's Too Stupid to Know About - May 14, 2021 {#44} w/ Angee of Grrrl Gangby PopSongsMixtape

*The setlist for the show is in the comments*

Pop Songs Your New Boyfriend's Too Stupid to Know About is a radio show hosted by Liz & Sean that airs every Friday from 9-10p PST on 101.1 fm (in Seattle) and online at space101fm.org.

Our guest on this week’s show is Angee Sentana from the indie pop trio Grrrl Gang. Grrrl Gang is from Yogyakarta city on the island of Java in Indonesia. They formed in 2016 as part of an emerging DIY movement responding to the country’s political unrest. Grrrl Gang play bubblegum pop songs that serve as a rejection to cultural conformity, and they write catchy hooks that are looking to slay oppressive ideologies. They are a very impressive band.

You can connect with Grrrl Gang on instagram at @grrrlgang

Connect with us on the socials for more nerdy record info & photos: @popsongsmixtape

Visit space101fm.org for info about supporting the radio station with a donation.

Thanks for listening!!! Tell a friend about the show!