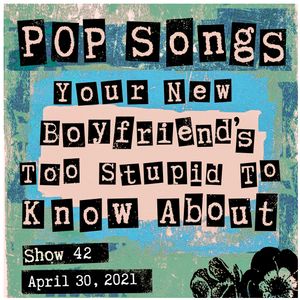 Pop Songs Your New Boyfriend's Too Stupid to Know About - Apr 30, 2021 {#42} Phil of The June Bridesby PopSongsMixtape

*The setlist for the show is in the comments*

Pop Songs Your New Boyfriend's Too Stupid to Know About is a radio show hosted by Liz & Sean that airs every Friday from 9-10p PST on 101.1 fm (in Seattle) and online at space101fm.org.

Our guest on this week's episode is Phil Wilson from The June Brides. The June Brides are a legendary English indie pop group who formed in London in 1983. Their 1985 debut album, 'There Are Eight Million Stories...' went straight to number one in the UK indie chart, and stayed there for a month. The June Brides split up in 1986, and Phil Wilson embarked on a solo career on Creation Records. Besides being an amazing songwriter, Phil is one of the nicest fellows you would ever want to meet. It is a great honor to have him on our show.

You can connect with Phil Wilson via:
Bandcamp - check out his cover of "White Night"!: https://philwilson.bandcamp.com
Twitter: https://twitter.com/philjunebride

Connect with us on all the socials: @popsongsmixtape

Thanks for listening and tell a friend about our show!