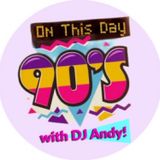 Never miss another
show from On This Day 90s

On This Day 90s is the latest chart decade show in the “On This Day” format and is from the same team behind the internationally broadcast and hugely popular On This Day 80s hosted by DJ Key.
A two hour show that in the 1st hour plays one song from each year of the 1990s plus special listeners request features “The Megamix”,” The Movie Soundtrack” & “US Number 1”. Also regular contributor Simon Scanlon aka SCANNY chooses his 90’s dance hit of the week in “Scanny’s Bangers”

In the 2nd hour the listeners choose a further song from each year of the 90s. Listeners also pick the songs for special features "Album Track of the Week" "The Big Cover Version" and "UK Number 1". Also regular contributor Chris Webb aka INDIE CHRIS chooses his “90’s Indie Chart Choice”.

Social Media: During and between broadcasts, listeners are encouraged to join the friendly chat via Twitter using #OnThisDay90s or on our dedicated Facebook page.