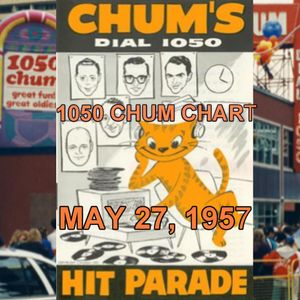 "Roger Ashby - Sunday Morning Oldies Show". This show was played May 27, 2007 on 1050 CHUM-AM celebrating 50 years. For 50 years chum was a Top 40 Station and an oldies station. There was a brief time that they became TEAM 1050 before going back to music until the morning of March 26, 2009, when new owners dumped the Oldies for good. Today I believe it is a sports station, but I have never tuned to, since 2009. Roger retired in late 2018 after more than 50 years at CHUM-AM and CHUM-FM. This show is the top 50 songs from May 27, 1957. Some songs that were played on this show have been removed as they really don't fit the Rock Era as I see it. There maybe a few I left in that you may feel that way about too! In the 50`s and 60`s there were no cell phones, no computers, no YouTube or very many TV channels, so listening to the radio was the thing to do. Enjoy music from a different time, with Roger, who always shared great stories about the music on his shows.