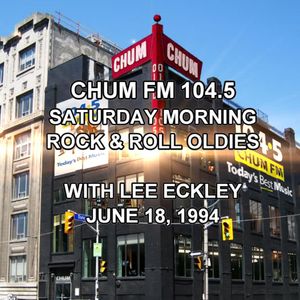 Saturday Morning Rock & Roll Oldies Show from a Very Hot June 18, 1994. Rick Ringer was the regular host of this show, but Lee Eckley was filling in on this Saturday. Show contains a lot of Rock and Roll and Classic Rock Tunes. Rick Ringer is now on a Country station 93.1 in Owen Sound Ontario. Lee Eckley is on the Rock 94.1in Oshawa Ontario. Chum FM was and still is a Top 40 Pop Music Station in Toronto. For 3 hours every Saturday morning they would play this show, which was a great way to start the weekend. At the end of this show is the first 15 minutes of the Ingrid Schumacher Show. She was Fired From 104.5 CHUM-FM After 40 Years in early 2017. She was a great announcer and deserved much better. I recorded a bunch of these shows in May and June of that year to listen while at the cottage that summer.