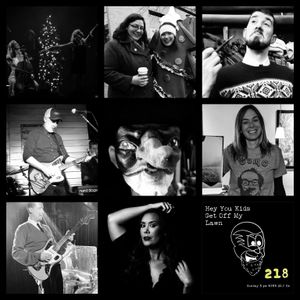 Kids.. it's still the fourth and final week of the Get Off My Lawn Holiday Season.. the plan was to do 4 one hour specials this year instead of the annual two hour special.. but this is the fifth show.. the Christ Candle.. I'm exhausted but I enjoyed every minute of the SIX hours.. Cousin Randy, Troy Lukkarila, Professor Hugo The Elf, Jim from Christmas Underground, Ezra Kire, Gareth Jones, Vanessa Peters, Leo Moracchioli, Thomas Pontén, Seymour Snott, Scott from Holly Jolly X'masu, Alexander Polinsky, Jaime Van Der Sluy, Princess Freakberry, Freaky Luigi and Ghost VonDracula all stop by..

The playlist for this and every past episode is available at https://www.oldmanfreakboy.com/

Old Man Freakboy's Hey You Kids, Get Off My Lawn airs Sundays at 8pm on WPNR 90.7FM in Utica, NY. The show is aimed at everyone looking for music not supported by commercial radio. WPNR reaches a 15-20 mile radius that encompasses the city of Utica and the surrounding suburbs.