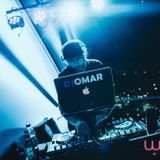 Never miss another
show from OMARNB

That’s how Rob Da Bank described Omar after booking him for Bestival.
Omar has been DJing professionally since 2001.

Having started his career in the nightclubs and bars of his native Isle of Wight, he quickly gained a reputation as a versatile open format DJ who has played a number of high profile events and venues throughout his DJ career.

With sets that can feature influences such as Hiphop, Dancehall, House and Garage, Omar has regularly performed on multiple occasions for brands such as Mutiny, Strongbow, Slinky, Eklectica, Isle of Wight Festival, and Bestival.

Omar has worked alongside renowned artists such as Axwell, The Beatbox Collective, Dave Pearce, Freejak, JFB, Tim Westwood and many others both as a DJ and promoter and continues to be in demand for much of the year,

.
A versatile, confident and technically skilled DJ, Omar Lakhssassi is a name you can trust to deliver, time and time again.