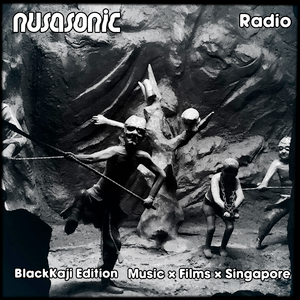 Nusasonic Radio BlackKaji Edition dives into the often overlooked world of music and sound in films. This episode explores unreleased music made by musicians from Singapore for films and moving image, a revisit through an interview by Salty Xi Jie Ng with Tan Pin Pin on her 2005 documentary of Singapore music called Singapore Gaga, and reimagined film scripts voiced and paired into music by various artists.

Additional information of the artists is in the episode’s compendium here: https://bit.ly/NusasonicBKR

Image by Mish’aal Syed Nasar. This radio episode is commissioned by Nusasonic.