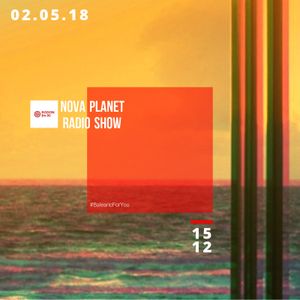 ◉ Did you miss me? Already one month since the last broadcast of Nova Planet Radio Show. Back in Rodon FM 95’s studio and fueled with April’s releases that never played, few classic and UPCOMING as well. It seems that I will hardly escape from the vortex of Napoli’s sound of today as May’s TRACK OF THE MONTH comes from Nu Guinea’s new album ‘’Nueva Napoli’’. More from Cala Tarida Musica, the label that Adam Warped, DiBo and DJ Nova (that’s me) will launch soon and run together and hopefully the future tense of Mediterranean sea front culture, DiBo original version of ‘’Savored’’ which opens Casa Del Sol 99 and included on the same title label’s debut release. In the show NEW by Jimi Tenor, Ebo Taylor, Bart & The Bedazzled, Blue Jazz TV, Rudy's Midnight Machine. Gabriele Poso (who covers Roy Ayers), Mr. Fuzz and Jessica Lauren among others.

Thanks Guido... Wishes for a nice weekend!