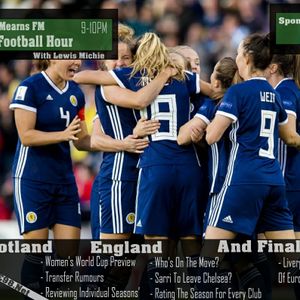 The Football Hour is an NE98 podcast, broadcast live on Mearns FM every Monday evening 9-10PM and available thereafter as a podcast exclusively here on Mixcloud.

SCOTLAND:
- Scotland's Women set for World Cup in France, who's in the squad?
- Reviewing the season for each Premiership team
- Transfer rumors and done deals

AND FINALLY:
- Liverpool Champions on Europe, what's next for Jurgen Klopps side?

Sponsored by Pizza the Action.