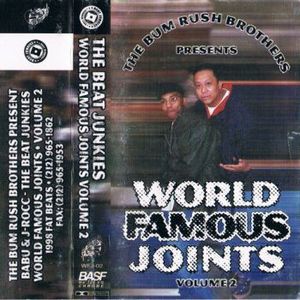 The Beat Junkies World Famous Joints - V1 Side B - The Bum Rush Brothersby Krissy B.

Classic cassette mixtape by the Bum Rush Brothers aka J.Rocc & Babu, entitled “World Famous Joints” Volume 2. This is made during the mid-late 90′s era when the Golden Era of Independent Hip Hop was going down; when mixtapes were litterally still made on 4-tracks, vinyl, & cassette tapes. This is also during the time that Babu, J.Rocc, Rhettmatic & Nu-Mark (Jurassic 5) were still working at the Fat Beats LA store on Melrose. A lot of classic artists & groups were featured on this mix, such as KRS-1, DITC, Gangstarr, & as well as future classic artists: Dilated Peoples, Lootpack, & Slum Village.Download NOW on beatJunkies.com

More from Krissy B.