#7 - The Identikit KIlling at the Curiosity Shop 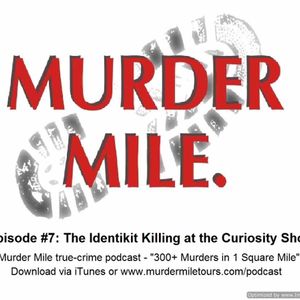 On Friday 3rd March 1961, at 23 Cecil Court (London), 21 year old Edwin Bush would brutally murder 59 year old part-time shop assistant Elsie May Batten whilst attempting to steal a £15 ornamental dress sword. And as shocking as the case was, how the culprit was caught, would be a watershed moment in modern British murder investigations. Murder Mile is a true-crime podcast and audio-guided walk of London’s most notorious (and often forgotten) murder cases, all set within one square mile of the West End. Each episode is accompanied by photos, videos and an interactive murder map, so that no matter where you’re listening to this podcast, you’ll feel like you’re actually there. https://www.murdermiletours.com/podcast.html   Murder Mile is researched, written and performed by Michael J Buchanan-Dunne of Murder Mile Walks with music written and performed by Erik Stein and Jon Boux of Cult With No Name, with additional music by Kevin MacLeod, as used under the Creative Commons License 4.0 (A