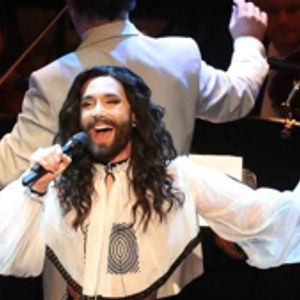 This show was 87th in the global pop chart.

The phenomenal Conchita Wurst performs for BBC Radio 2's 'Friday Night Is Music Night' in a special concert recorded at the iconic London Palladium on 25 February 2018.

Born Tom Neuwirth in Styria, Austria, Conchita became an international sensation when she won Eurovision in 2014. Now she brings her spectacular orchestral show to the UK, for the very first time. Accompanied by the sixty piece BBC Concert Orchestra, conducted by the acclaimed conductor Wilhelm Keitel, and incorporating her own rock band and special guests, BETSY and Mica Paris, Conchita will present her favourite divas' songs, which have always been a source of inspiration for her.

The show includes a performance of Prince's, 'Purple Rain' that was greeted by a standing ovation, a barnstorming finale with Conchita's Eurovision hit, 'Rise Like A Phoenix' and the hilarious story of Conchita's hope to become Mrs Ricky Martin.

Really a masterpiece! So happy I was there to see it and now to relisten again!!!

Such a great concert, Conchita is a fabulous singer! Many thanks for uploading!!!

Amazing concert, wonderful songs, a really experience to listen to it! The biggest thank you for sharing!

Ima Sumac Bo Mambo is the best cover I've ever listen... and The sound of music, The colour of the wind... Conchita did a masterpiece Concert and I will regret forever to haven't been there

This concert at London Palladium was so fabulous, I was there and I saw this live.Conchita is so amazing entertainer and her voice is just so great. It's wonderful that I can listen to this again and remember that unforgettable evening there.

Thanks a lot for upload here, Jason.
A really spectacular live-event. "Purple Rain", "Show must go on" or Barbra Streisand & Shirley Bassey - what a mix and voice! Can´t wait for the next album with Vienna Symphony.

She, Conchita resp. he, Tom Neuwirth is really phenomenal!
Saw videos of her performance in Sydney opera house and had the pleasure to experience her live-performance at Philharmony Berlin and Hamburg - what a damn good singer & born entertainer!