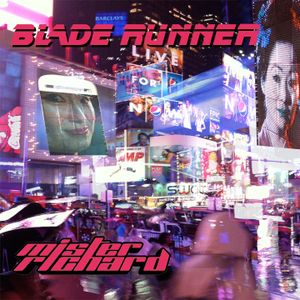 This show was 14th in the global psy-trance chart.

An alternate soundtrack for one of my favorite movies! Climb into your spinner and zoom around adrenaline soaked LA circa 2019...

Very excited that Ridley Scott has planned a Blade Runner sequel starting production in 2016. The Vangelis soundtrack was so important to the cult success of the first film- I'm curious what they will find sonically appropriate for the next film.

Oct. 2017 update from the director regarding the Blade Runner 2049 Soundtrack: Denis Villeneuve and Jóhann Jóhannsson have collaborated three times in the last few years. That partnership was meant to continue with “Blade Runner 2049, but Hans Zimmer and Benjamin Wallfisch eventually took over for Jóhannsson.

“The thing I will say is that making movies is a laboratory. "Jóhann Jóhannsson is one of my favorite composers alive today. He’s a very strong artist,” Villeneuve said. “But the movie needed something different, and I needed to go back to something closer to Vangelis."

https://www.mixcloud.com/djob1memphis/octobers-very-own-mixxx/ NICE SET 🤘🏾 anyway you think you could show love back and repost this or like 🤷🏾‍♂️ GOOD LUCK AND KEEP GRINDING .. P.S Fuck TRUMP

Not sure what happened there Tristan- ghosts in the machine? Will try to find your mix and give it a listen.

This is different. You appeared in the middle of a live mix with me a few days goa with me playing in two different app's at the same time; it was weird as fuck. I was mixing some Indian mantras with dance sets from a company that was grooming me and your mix came up as the next track-I thought I was hearing one of my own mixes...I have a Bladerunner mix y'see? Compounded Inter-planetary mind-fuck or what guys? Don't do that to me again guys, I already thought that I'd had intrusions, that kinda' convinced me for a moment? Anyway how does it feel to be famous?