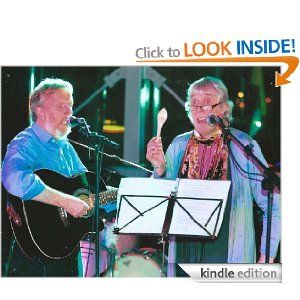 Mike had the vomiting virus. Well, that's his excuse, so he sent Jane along on her own, to get interviewed by Jill Bowyer on her radio show, the regular 'Kaleidoscope' session on Salford City Radio, 5pm on a Tuesday. Jane talked about the ebook she's been writing with Mike, which is all about protest songs. It talks about the history of protesting songs, then gives hints and tips on how to write protesting songs, all the different ways it can be done, and how to get your song heard, recorded and noticed. It's a darn bargain, and you can download it from Amazon as a Kindle ebook, (but you don't need a Kindle, you can have the free app for any old computer, laptop or desktop, PC or Apple). Jane chose a few of the tracks, Jill chose the others, maybe that's why it's such a mixture. Still, Jane managed to get in her protest song about the derelict church at the end of our road, and a joint effort, the Christmas song of 2010.