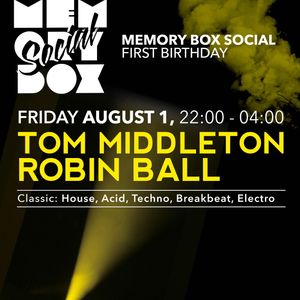 Tom played a superb history of Roland's TR-808 set for us last year so this year he took on Rolands' TR-909 Rhythm Composer.

Tom says: "Just as ubiquitous across the many forms of electronic dance music and has been so important in formative years of the House, Techno and Electronica scenes in the late 80's and early 90's.

My earliest memories of it's use, and in many ways my personal favourites are by the Detroit Techno pioneers Kevin 'Reese' Saunderson (Inner City) and Derrick 'Rhythim is Rhythim' May. Alongiside Artists such as Mark 'MK' Kinchen, who is back in the limelight, immersed in the current wave of Deep House.

So expect many classics and lesser-known but highly relevant examples of the peerless beat box that generates the most thumping kicks, snappy snares and sizzling hi-hats still used to this day. All hail the TR909.”