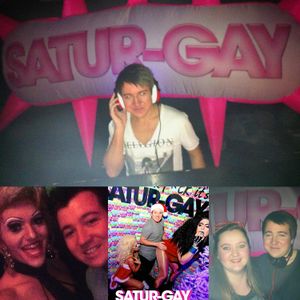 This is my SATUR_GAY Mix. I Night i was a resident DJ at from the early days at Basement to the Night's at the Tiny Venue. There are so many songs over the years that remind me of specific nights and i've incorporated them in the Mix.
Download Link - https://drive.google.com/open?id=0B-XpJiuUZUuwellYcjkyN3NpVlE

The first track is Katy Perry's I Kissed A Girl, As a huge music fan i always loved finding new tracks from emerging artists and playing them and watching the crowd's reaction. This song was special because at the time i was djing in another bar before i joined this Weekly Gay Night, the SATUR-GAY dj's who were out promoting came running over asking what it was. I remember saying "Mmm Hmmm" after they left ha ha. Soon after i joined the night over at Basement.
Every other track have similar stories which i can't fit in this description.