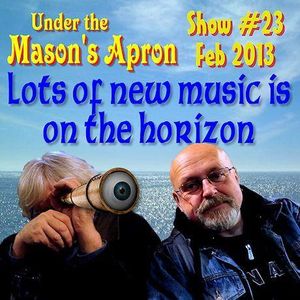 We cunningly start the show with Lau in anticipation of the Folk Awards. Brownie points all round!
Only we could discuss subtitles on a radio show but cutting edge stuff.
Gramster misconstrues a fox hunting song and Mal refuses to be drawn on the subject lest he gets on his soapbox.
Dodgy Australian references (dodgy impressions rather than dodgy Australians), brought a smile to the studio. Not sure if they were better than the posh English accents we tried, but linguistics are not our strong point - as you can tell.
A track from a clawhammer banjo player that doesn't actually include any banjo? Must be a first.
Stage layout isn't our strong point but we still question the logistics of fitting a seven-piece band into the toilet. Only time will tell.
Mal's bedroom wall is discussed at some length. Are there no secrets left?
Lack of research forces Gramster to take time out to Google mid-show but admirably rescues the situation.
Couple of songs about insanity? Par for the course!

Under Masons Apron Folk Show9y ago

Bryony Holden of TINKERSCUSS9y ago

Crackin show but I might be a teeny bit biased

Under Masons Apron Folk Show9y ago