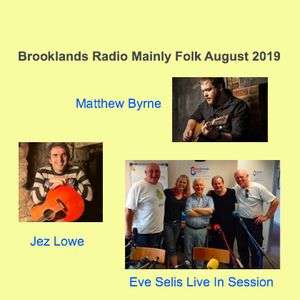 Matthew Byrne is currently playing at the Sidmouth Festival. We caught up with him before he made the trip from his native Newfoundland. You can hear why we think his home grown music will take the U.K. by storm.
During last year's Sidmouth we recorded an interview with Jez Lowe focussing on the release of his first book 'The Dillen Doll'. Check it out in the second part of the first hour and hear some great supporting tracks by Jez.
Five years ago we were knocked out when an Americana star Eve Selis came into our studios to do a live session. Well lightening strikes twice as on her recent U.K. tour Eve returned to deliver another brilliant set. Such a nice person and such a great singer !
Hector Gilchrist returns with the 'Song and the Story' and we finish the two hours with some great tracks chosen by Jim Guynan in his Roots Canal section.
Presented by Bev Harris. Produced by Jim Guynan