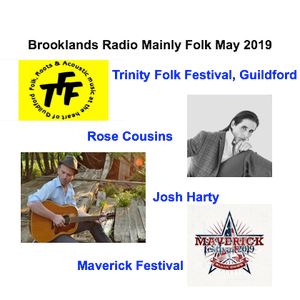 Good things come in twos in this month's show as we visit two upcoming festivals and two visiting American artists.

Guildford's Trinity Folk Festival is on the 17th and 18th May. Paul Graham, one of its organizers with his wife Caroline, tells us who is playing and how they run this very successful event which is already in its seventh year !

Next up is an interview with Rose Cousins who was recently in the UK promoting one of the best albums to come out in recent times. It's called "Natural Conclusion". We chat to Rose about its creation and play some of our favourite tracks.

In the second hour we kick off with some upcoming Americana releases and then it's over to Josh Harty.
He played Twickfolk last month and you can hear what life is like on the road with Josh plus a live preview of a song before it goes on his next album.

Jim Guynan's Roots Canal this month is all about July's Maverick Festival with accompanying music.

Folk is my life!