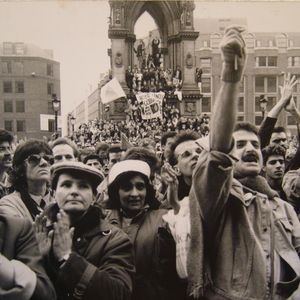 This show was 39th in the global interview chart.

This audio documentary was created by Abigail Ward to mark the 30th anniversary of Manchester’s anti-Clause 28 march, 1988. Attended by 20,000 people, the protest was a seminal moment in UK LGBT+ history. The piece seeks to evoke the sounds and emotions experienced on that day through interviews with marchers, fragments of archive and music.

The title comes from the chant, “we’re here, we’re queer and we’re not going shopping”.

Section 28 formed part of the Local Government Act 1988 . It stated that:

A local authority shall not:

SUPPORTED BY SUPERBIA AND MANCHESTER PRIDE. Special thanks to Greg Thorpe.