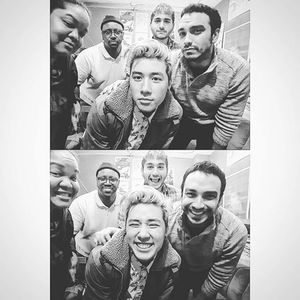 Sharon H. Chang is a Seattle-based author activist. Her debut book Raising Mixed Race: Multiracial Asian Children In a Post-Racial World was released December 2015. Gian-Luca Matsuda is a Portland based queer nerd & is the spawn of an Afro-Boricua mother and a Japanese-Brazilian father. His work focuses on the intersectionality of racial, environmental, and social justice. Ari Chivukula is a genderqueer mixed-race digital denizen who can be found running around south Seattle when not in virtual reality. Aki Kame is a genderqueer mixed-race community advocate, organizer, and writer; Brennon Ham is queer, hard femme, mixed person of color originally from the DC/Baltimore area. Brennon is a Youth Program Community Advocate for The Northwest Network of Bisexual, Trans, Lesbian & Gay Survivors of Abuse and one of the coordinators of Seattle's Queer Mixed Happy Hour.

More from #LuluNation + Crew with Mr. B