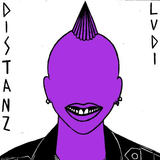 Passionate about music mainly focusing on its darker shades from minimal-wave to industrial, Ludi has always enjoyed travelling around Europe for concerts, festivals and parties. She first started to DJ at post-punk/coldwave parties in France in the early 2000's. Nowadays residing in Berlin, she is a member of Dis/Tanz, a D.I.Y. collective organizing benefit parties for causes usually related to queer and women's rights. In the past years she played amongst others at Kalabalik (SE), Gothic Pogo, Waveteef (BE) and Return to the Batcave (PL) Festivals, as well as at TIQ, Ceremonies, Herzschlag x Detriti, Gegen in KitKat Club, Rituals in Berlin. She opened for Kompromat at Berghain Kantine, participated to the Fabrika Festival in Bi-Nuu and played at Decadence in Bologna (IT) and Electrowerkz in London (UK).