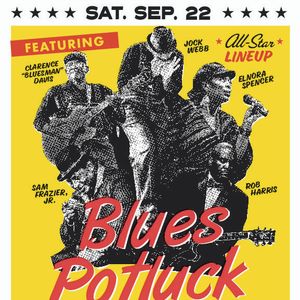 THE LOST CHILD, EPISODE 314: BLUES POTLUCK! Originally aired 9.13.18. Tune in for an hour of exclusive performances from an outstanding line-up of contemporary Alabama blues musicians -- Clarence "Bluesman" Davis, Jock Webb, Elnora Spencer, Rob Harris, and Sam Frazier, Jr. All of the music in this hour was recorded live at The Jaybird in Birmingham, or was originally performed and broadcast live from our studios.

Each of this hour's featured artists will be performing at The Jaybird's Blues Potluck on Saturday, September 22, 2018.