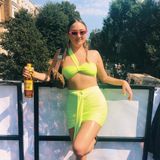 Never miss another
show from @LilyMercer

Hailing from North London, Lily Mercer is a DJ, Presenter and the founder and president of Viper Magazine, which was born out of an ever present love of hip hop, a passion for words and a devotion to print publications.

She has a weekly radio show, The Lily Mercer Show, previously on Rinse FM and NTS, playing the best new, underground hip hop.Through the show, she developed a reputation as a tastemaker, playing artists like xxxtentacion, Anderson .Paak, Chance the Rapper, 6lack, SZA, Kali Uchis and more on UK radio for the first time. She was also a regular voice on Beats1 [Apple Music’s internal radio station] hosting the London playlist hours.