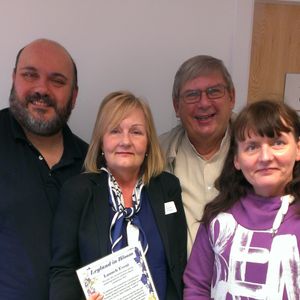 Marc and Liz are in the studio for their fourth show together. This show was slightly affected by internet connectivity issues so you may experience occasional 'jumping' of speech and music - our apologies for that.

Guests in the studio today were Cllrs Ken Jones and Susan Snape. Both of them are heavily involved with Leyland in Bloom, Ken as Chair of the Committee. They talked about the event in Leyland, which is now in its third year. Leyland in Bloom was inspired by colleagues in Penwortham who organised the Penwortham in Bloom competition, while
Farington and Lostock Hall will also join in this year with their own competition). Entries must be submitted by 2 June and there are several categories of entry. If your garden has ever been admired by neighbours or passers-by, pleased don't be modest - enter the competition!!

Today's lyric teaser was inspired by something that happened yesterday - and it wasn't Mother's Day.