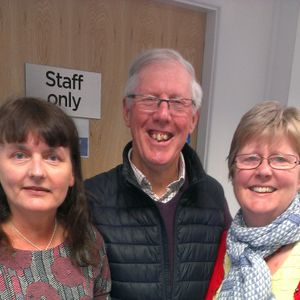 Len Daniels, Chairman of Leyland Morris Men:
Leyland Morris Men are one of the oldest Morris teams in the UK - probably the oldest in NW England (formed 1889). They were formed by the organisers of Leyland (May Day) Festival, who had seen Morris dancing in Knutsford. Saturday 29 April sees the 50th anniversary of the 'revival' of the Team and they're planning a celebration event in the town for that day.

Maureen Chadwick, independent diabetes nurse, trainer and consultant:
Maureen is a former Nurse Consultant in the NHS, who struck out on her own after taking early retirement around three years ago.