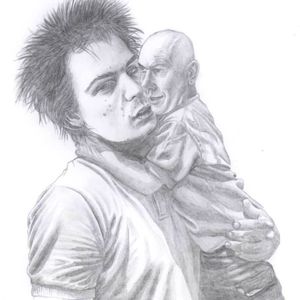 Peter Harris is an artist, film-maker, and musician. His work often involves experimenting with new ways of making self-portraits, many of which become collaborations. His longest-running and most well-known association is with Jamaican music legend Lee ‘Scratch’ Perry. Since 2003 they have been working on a series of drawings, paintings, and films as well as music projects. In 2018 he began working with Trashmouth Records and released his first solo album Adverts which included guest performances by Lee Perry and Vic Godard. Each album contained an ‘art advert’ in the form of a one-off painted collage. He is also working with Zsa Zsa Sapien from the South London band Meatraffle on a collaborative music project under the name ‘The Hi-Fi Twins’. BombArt, is Peter’s current project with Mark Stewart, artist, vocalist, producer, and songwriter from Bristol, widely known as a founding member of The Pop Group, Mark Stewart & The Maffia, and as a soloist.