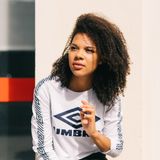 Never miss another
show from JAGUAR

With a supercharged backlog of award-winning radio shows, electrifying mixes and the sharpest eye for cutting edge new music, Jaguar is one of the most impressive and exciting new DJs to break out onto the UK scene. Everything she does is with an authentic energy and positivity like no other, which was instantly picked up by BBC Radio 1 and 1Xtra, who brought her on board as an intern and member of its highly-regarded Youth Council back in 2014, as well as making her the face of Radio 1’s ‘One Million Hours’ TV campaign, which was regularly aired on prime time BBC One last year.

It all kicked off for Jaguar with her weekly show on Leeds Student Radio, where she shined a light on promising new artists from across the city and beyond. Her efforts were nationally recognised at the Student Radio Awards 2016 when 6 Music's Steve Lamacq gave her the Gold Best Specialist Music Award.