#016 - Before & After podcast exclusive mix by Protuberance ( Bulgaria ) 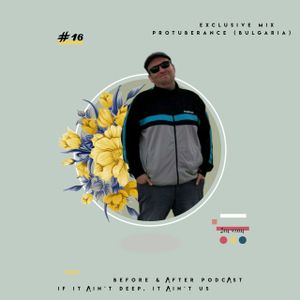 #016 - Before & After podcast Exclusive mix by Protuberance [ Ивелин Илиев ] ( Bulgaria )

Behind the project "Protuberance" is Ivelin Iliev - a producer and DJ from Bulgaria. He found out about electronic music for the first time in the mid-1990s when he first heard Prodigy. In the beginning of the new century, he began organizing underground techno parties with friends. In parallel, he started producing his own music. In 2010, he bought the necessary ed maked his own studio. Since then, there have been 4 albums released, one of which is on a CD for the oldest net label in Bulgaria for experimental electronic music Mahorka. His name appears in the dub techno combinations of Cold fiction - Future [e] cho.

More from Before & After podcast