Up to date Roots gone a Farin - Deep Roots pt 2 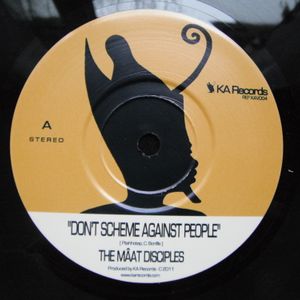 Part 2 of a selection of fairly recent European productions with a Deep Roots sound and feel. Kicking off with a heavy downbeat countryman style out of Dig this Way camp, followed by the UK rising singer Joe York with his characteristic Congo’s - style singing (many recent productions with that Brighton/Bristol sound… though the man’s from Wigan I think) with an interesting (bemusing?) take on the theme of gentrification… good music still, nice horns. Then some deep Roots outta France on Ka records label with Maat Disciples, also featured later in the mix paired up with Earl Wonder. A couple of Courtney John cuts from his recent LP, mixed in with a couple Payo Soul Rebel cuts too… clever and conscious lyrics as ever. Last segment is a riddim excursion on a heavy production outta Germany from the Selktor Shop crew I think, with killer cuts from Sugar Minott, Jospeh Cotton, Ray Darwin (all on Love Tank 7”) and Mighty Howard (Planet Dread Records 7”)

Here is my contribution to the "Up to date roots": https://www.mixcloud.com/mizizi/roots-revivers-pt-1-rare-strictly-vinyl-killers/

Big up Mizizi, wicked selection that! Thanks for sharing

Big up for spinning Gentrification 💥

Mate, my pleasure! Thanks so much for the shout... I really rate your productions! Tonight and Judgement tree were also on the pre-selection list for this mix, but I settled for gentrification as it had a slightly more Roots feel... that 'bone! bad
You have a good sound bred, keep up the works! Big up.

Thanks! Kind words. Me and Joe we're both Manchester based for many years. Still home for me despite being down south now.

Made my week! Good to know modern day roots warriors keeping the flame burning. All hope is not lost for old Europe! Stay well!

Yes Bopsky, long time. Thanks for the shout brother, good to hear from you

Yes my friend... thanks for the shout. Take care