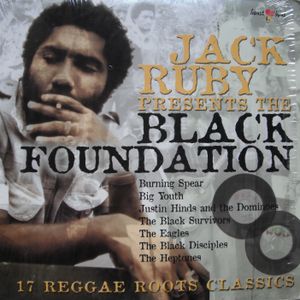 Spotlight on the legendary Jack Ruby this week and his highest quality Roots productions of the 70s. A larger than life character, based in Ochi, featured in a fair few documentaries from back in the day, and controlling a number of business ventures including a very successful ganja trade operation. He was a notorious producer, famous for spotting and nurturing the local talent, and selecting the best musicians of the day in various formations to build majestic heavy Roots music, usually with full horns section, known as the Sound of St Anns, or the Black Disciples. Kicking off with 2 killer instrumentals (including a heavy Rockfort Rock) followed by 3 Roots masterpieces by Black Survivors, Tyrone Taylor and the Skulls: Come away Jah Jah children (2 versions), Life Table and Black Slavery day (2 versions, the 2nd one not Jack Ruby I think, but can’t leave it out still…). Outro on more upbeat Heptones & Ken Boothe cuts and The Skulls’ killer ‘Third World’

Big up Zen, thanks for the shout

Big up StudioRed... Thanks for checking it bro

Nice mix mate..hit the spot this Sunday morn thank you

Thanks Mark, thanks for the shout