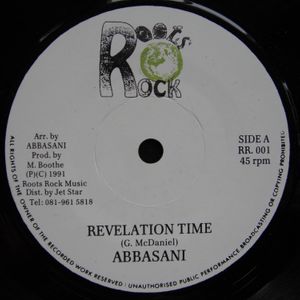 A selection through Roots music of the early 90s, some with that mix of analog & digital sound, with syndrum/synth prominent, others with that pure digi production and moody edgy sound of early 90s.. Many a killer and personal fave. Kicking off with the classic militant steppers ‘Revelation time’, Abbassani’s first release I think, paired with a more downbeat one drop but equally killer cut from one-away singer Furnace. Next up another classic ‘Jah love so right’ and a killer Ijahman Levi ‘Earth no heaven’… big up the angel sound, ‘Vengenace’ (bad Sky High 7) and a nxt Abassani cut. Second segment dives into to the pure hardcore digi productions, with some serious tunes like Drought (Yabby You prod), Wadada cuts on Gilbert riddim, a killer Gregory on Xterminator 12, a total gem on Outernational 7” double-sided killer ‘Mama Africa’ with its outstanding organ version, well worth checking that. Outro on 2 big tunes ‘Earthquake’ (Ruxy) and Yami Bolo’s ‘It’s not surprising’ Stepper anthem