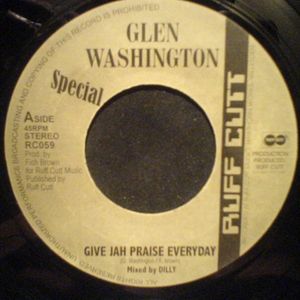 Coming with big UK 90s Roots classics this week, showcasing labels like Ruff Cutt, Stingray, World enterprise and Saxon-bag full of Roots killers, all 7s. Kicking off with the murderous White Squall riddim outta Ruff Cutt camp, with killers from Glen Washington, AL Campbell and Mighty Diamonds…and an odd-ball from Paul Eliot on a re-make of the riddim but with different bass line… deeper and more analog… total killer. Then a run of World Movements 7” with Roger Robin (under his alias Nyah) shining with his Garnett style voice, and the killer Great pretender riddim with Luci and Mikey General smashing it. Then the Lava riddim outta Stingray camp which I can never help myself running in combo with the Maroons riddim- killer cuts from Bushman, Freddie McGregor and Glen W. Finishing off with the Jah live on riddim on both Saxon and Ruff Cutt (slightly later releases) 7s with big UK singers like Lloyd Brown and Roger Robin but also JA stars who scored big on this riddim: Beres and Jr Kelly.

Give Thanks Heala!! Always a veeery uplifted selection for i!!! Blessed Love

Yes Madden, thanks for checking it and for the comment! Big up

Yes Khaled. Thanks for that. Picked up the Tad Hunter/Peter Spence 7 but seems the FP and the Lehbanchuleh cuts never made it on 7 or LP... please lemme know if I'm wrong! Will keep digging. Big up

Big up my friend- thanks for your live mix sessions too

@Heala grab Tad Hunter - Praises to Jahovia (Stingray) on Lava riddim. Probably the best cut along side the Glen Washington.

Wicked! Never knew that cut. Will be picking it up sharpish :) Thanks for sharing! one of my favourite things about this music: always more to discover and enjoy...
Big up Jagu

Big up my friend thanks for checking it

Tad hunter give thanks praise