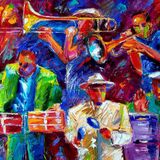 Ray Cruz was born in Brooklyn, New York, and spent his teen years in Puerto Rico. He discovered his passion for music at a young age while enrolled at a military boarding school in New York State. He played the trombone in school bands, during his Air Force service, and with bands in New Mexico, Colorado, Arizona and Texas.

He began his radio DJ career while in college, hosting two FM Salsa programs for the Universities of New Mexico and Albuquerque. In 1990, he started his radio career in Hawai‘i at UH Manoa’s KTUH. A year later, he joined HPR as a volunteer host with Sabor Tropical, playing Salsa, Classic Salsa, and Afro-Cuban Latin Jazz. Cruz became a member of the HPR staff in 2006 and has served as the local host for NPR’s All Things Considered and HPR’s morning show Foreward. He is currently the station’s Assistant Operations Director and host of Latin Beat.

In 2002, Cruz was awarded a Lifetime Achievement Award at the 4th Annual Los Angeles Salsa Congress.