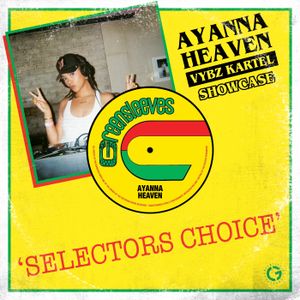 Ayanna Heaven is a DJ, radio host, and event producer living in Brooklyn. She spent her childhood in her native St. Mary, Jamaica in the golden age of Jamaican Dancehall of the 90s. While her DJ work takes her on journeys into Soul, Funk, Hip-Hop, and other global sounds, Reggae & Dancehall remain at the core of her identity as a DJ.

She recently backed Reggae icon Sister Nancy and opened for Protoje, Lila Ike, and Jesse Royal. Other recent gigs for Spotify, Meta, and New York’s iconic Museum Of Modern Art have raised her profile, taking her to London and back to her home country of Jamaica in the process.

Her mix for 'Selectors Choice' hones in on the work of Vybz Kartel whose early work was released on Greensleeves - expect some hardcore Dancehall and some tuff lyrics and riddims mixed with style & finesse.