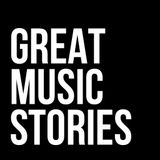 Never miss another
show from GreatMusicStories

For the last seven years, Great Music Stories has led the discussion on a new generation of rock bands in the UK - a series now of more than 1,200 interview hour specials and 3,900 interview shorts. The archive tells the stories of the rise of hundreds of new bands as it happened. In tandem with this, the music has been aired on a Friday rockshow dating back to Janaury 2015, a grassroots show that has stood tall for the scene and been short-listed for seven national awards since 2015.