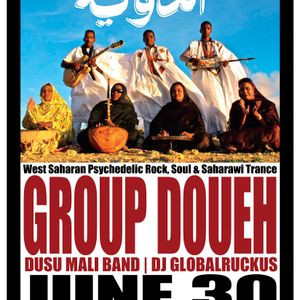 Majority of my set opening for the amazing Group Doueh from Western Sahara. The show was fantastic and at the end of the night Doueh, the leader and shredding guitarist asked me for a copy of my set. So I went home and recorded the majority of it into this nice package. Much of the music is from Mali, as I had previously played an all Mali music set opening for Tinariwen and drew heavily from that and was having trouble finding some of my Moroccan and Algerian music I had intended for the night, but I wasn't trying to restrict this set to specifically Mali music. Just laying out a sound track representative of that area of the world and something worthy of an opening slot for such an awesome band. I hope you enjoy.

wow. this is beauty! is there some sand between my toes?