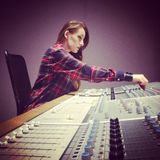 Never miss another
show from Gi.U.

Ginka Uchkova a.k.a. Gi.U. was born in 1985 in Bulgaria.
Her addiction to music began in 1990 while attending piano lessons and singing in choirs.
In 2002 she began her training in classical singing, then she graduated high school with profile "music".
In 2007 she recieved a bachelor degree at Academy of Music, Dance and Fine Art (Plovdiv, Bulgaria) with focus on classical singing.
In 2010 she obtained a master degree at New Bulgarian University with specialty "Music master in opera singing".
Several months later she enrolled in Audio Engineering Course at Sofia University "St. Kl. Ohridski".
in the beginning of 2013"An Angel's Heart" (vocal mix) reached place 72 in Top 100 Vocal Trance on Trackitdown.